Here you can see, how we find our way through a flock of cattle, that has occupied both sides of the highway and crossed it like they wanted to…

But let’s start with the night: It rained heavily. After midnight, a thunderstorm went over West Wyalong and we, lying under a corrugated sheet roof in our motel room, had the impression and noise of the doble strength.

In the morning, the weather clamed down and we started our 550 km way through the outback to Mildura.

Directly behind West Wyalong three kangaroos suddenly crossed the road directly in front of our car. What a luck, that we didn’t hit them. They come so abrupt that you have no chance to stop. 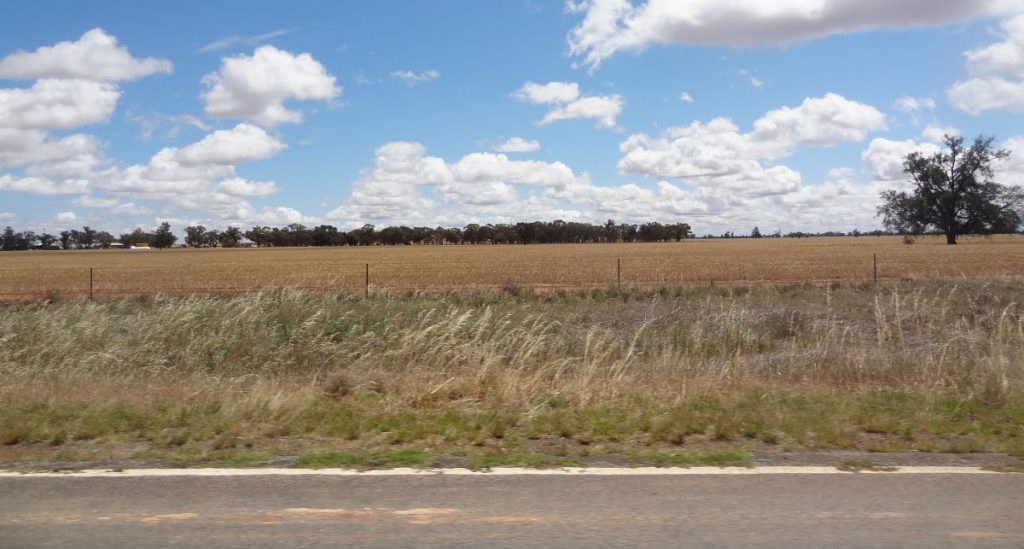 In regard of animals, the flock of cattle was the exception (although we have overtaken a pickup with a huge bull on the trailer which surely was on its way to mount a female). What we mainly saw from West Wyalong to Hay were huge grain fields, partly watered, along the highway, with big silos for storage from time to time- agriculture on a large scale. In between hardly any settlements. 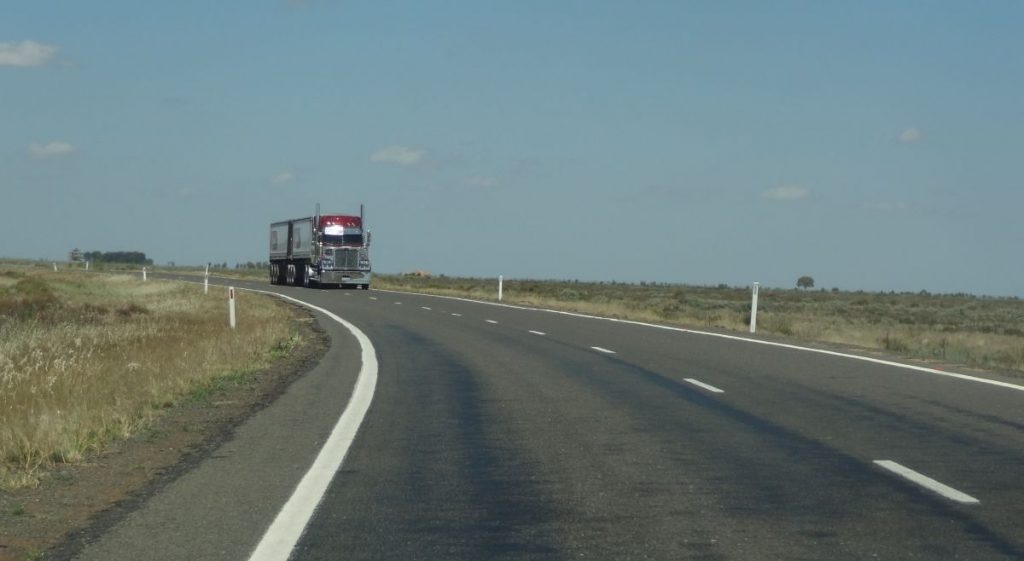 And even though we had it already: the highway with it’s big trucks is always a foto motive that impresses us. 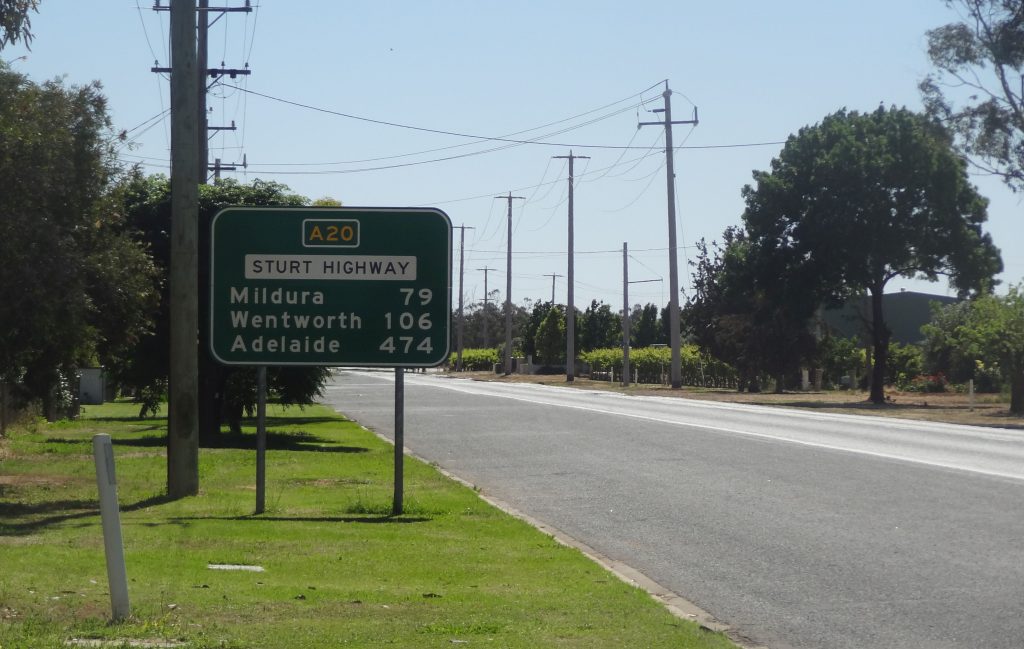 From West Wyalong we first went to Hay, where we took a coffee, after that Balranald – another coffee – finally to Euston, where we took this picture, and then Mildura. Here, you have extensive viticulture.

Mildura lays at the  Murray river, the longest river in Australia. It is not very broad and not comparable to the river Rhine. But it is the biggest/longest one in Australia, the only one that is navigable to some extent. 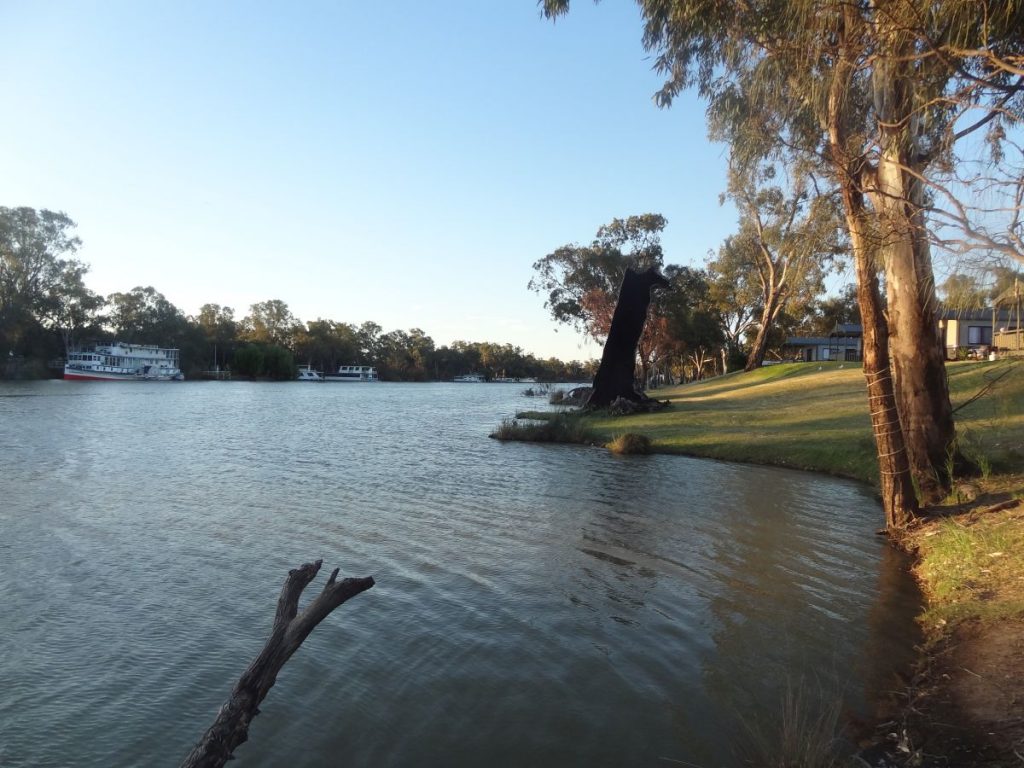 This is it -the Murray River – directly at our campground, Tonight and tomorrow we will camp here for the lat time, before leaving our tent in Adelaide. Today, our sleeping bags attract us again, as well as the good dinner Annette is preparing (rest of our yesterday Chinese dinner, spiced up by some vegetable like Pak Choi), with fresh Australian shrimps and salat as a starter – and of course some wine.

And here comes our today’s jouney…