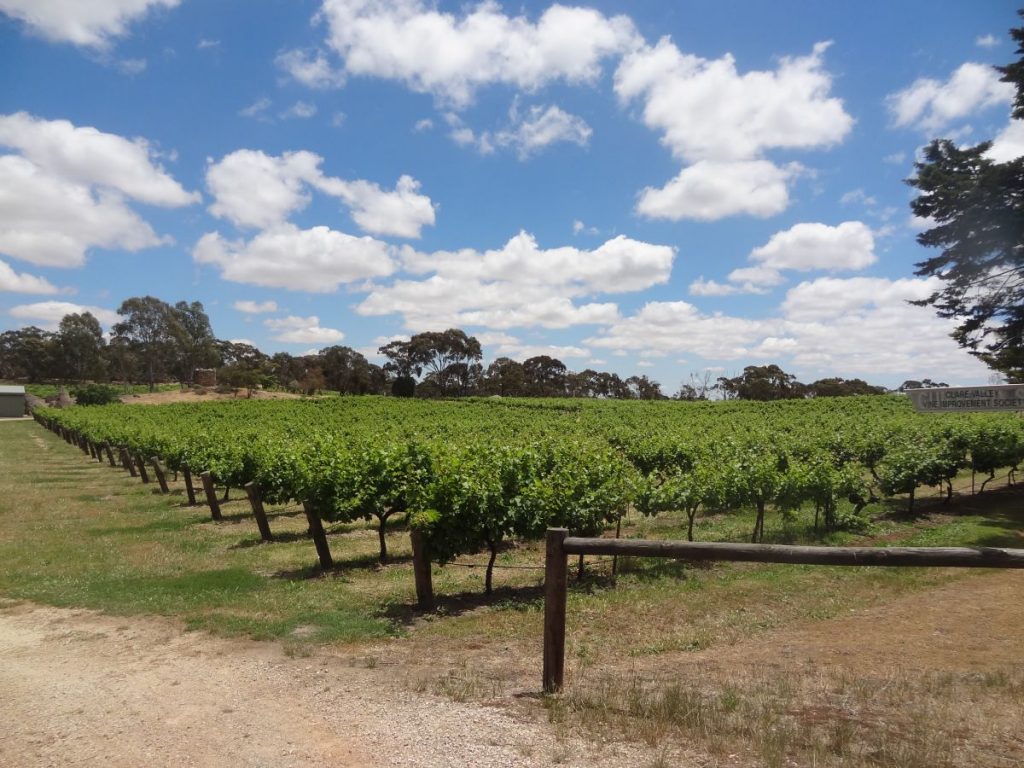 Friday, we worked on our blog and rearranged things – in the afternoon, we want to go northways to the Clare Valley, one of the best known wine areas in South Australia.

The picture shows one of the vinyards of the monastry of Seven Hills, that is run by Jesuits up to now. It is interesting, that a woman is now the winemaker. Nevertheless, we did not so much like the wine. 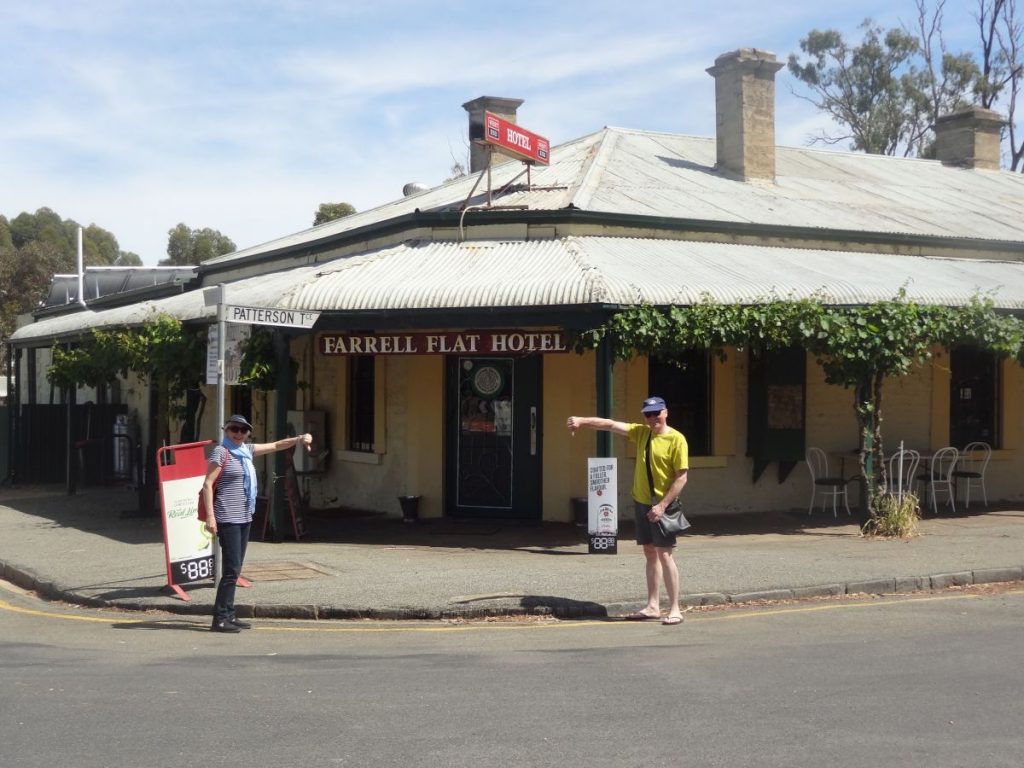 Friday afternoon, we made our way through the rain to our accommodation in Farrell Flat.

We will say more about Farrell Flat later – first, we are happy to be there and set some hope in the good weather forecast. For dinner, we reserved in the nearby pub, the Farrell Flat Hotel. That was a wrong decision. The meal was very poor and pricy. Therefore Kerryn and John show „thumbs down“ before the pub on the picture that was taken later.

Hurrah, the promised sun comes out and brings temperatures up to the 30s. Unfortunately, Wendelin forgot his cap in Adelaide – a  subconscious misstrust in the weather forecast. So we had to start with buying the most cheap cap we could get. 10 AUD is the price for forgetfulness at Target.

Then we go on to the Kilikanoon winery. There, we become members of the wine-club, because that gives us a nice little discount for the bike hire. The bikes are outstanding, and after all is adjusted and packed, we can leave. We bike on the Riesling Trail to the monastry of Seven Hills.

And here comes the map. The red sign shows our way – you can see, it is not so much we have done… 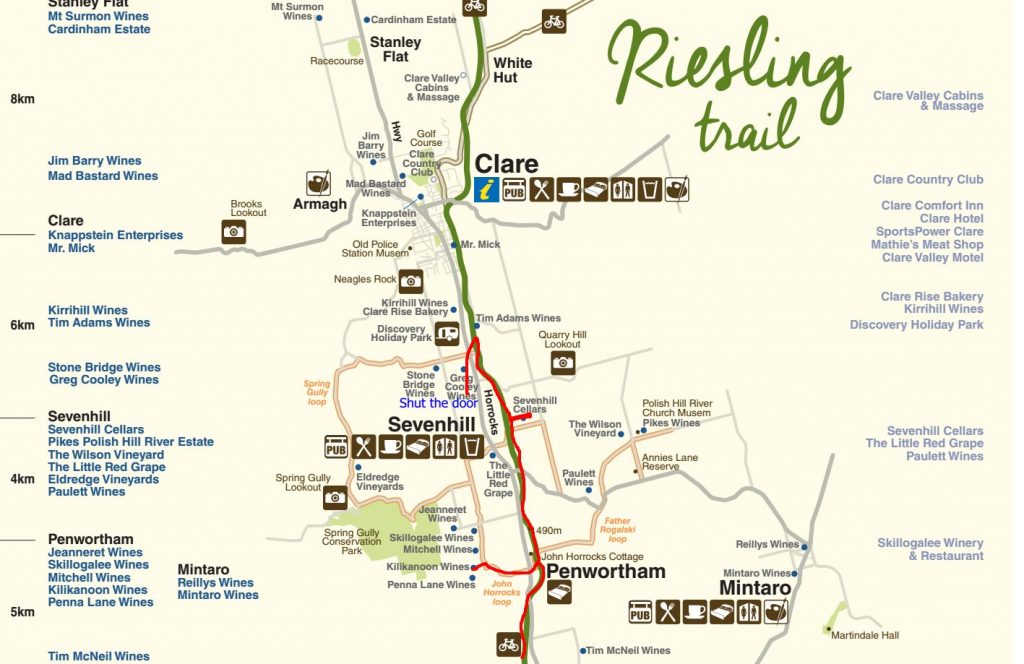 …but there were so many wines to taste on the way! 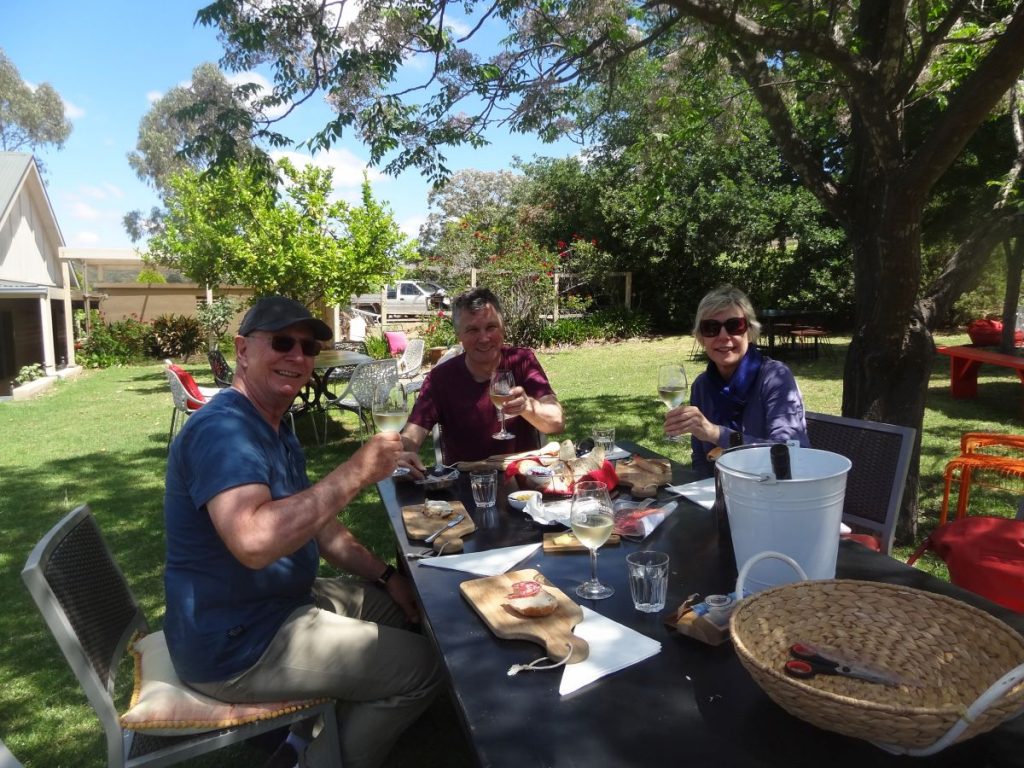 Here we sit in the garden of the „Shut The Door“ winery. The story arround the funny name is a little bit confusing – and unfortunately the website brings you only to facebook.

We drink a bottle of nice white and added a picnic, that we could pick out of several offers in the cellar door. 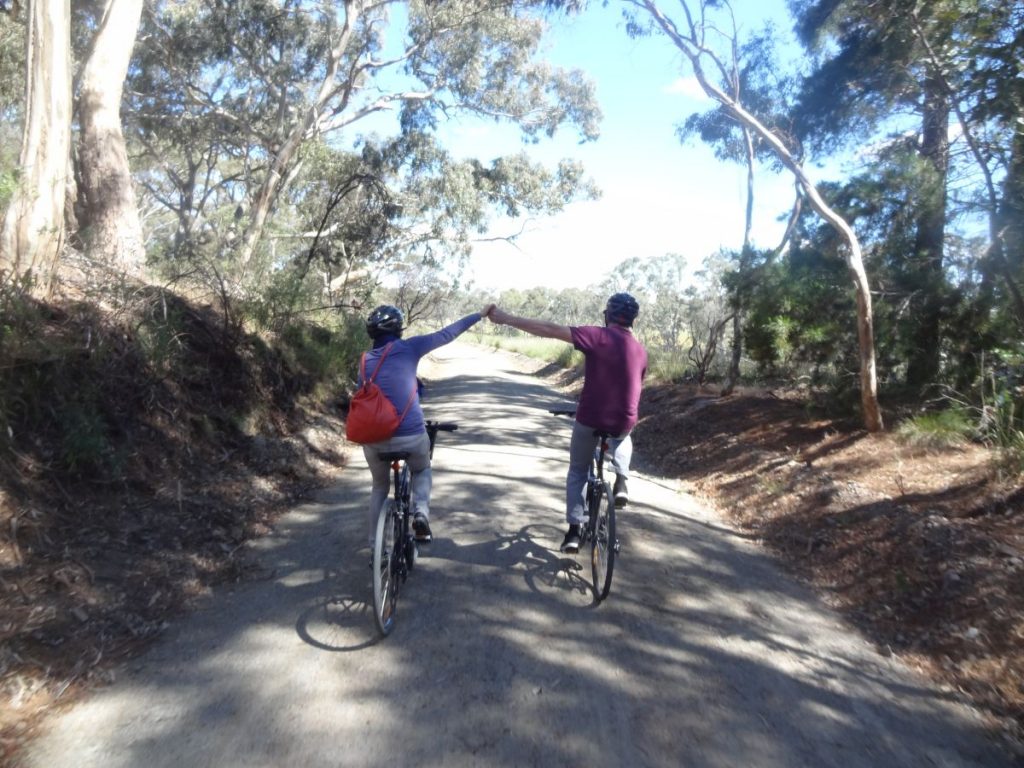 The Riesling Trail is really nice. It follows a dismantled railway track and therefore is easy to ride. You can taste a lot of wine before the little mountains get to steep for your legs. 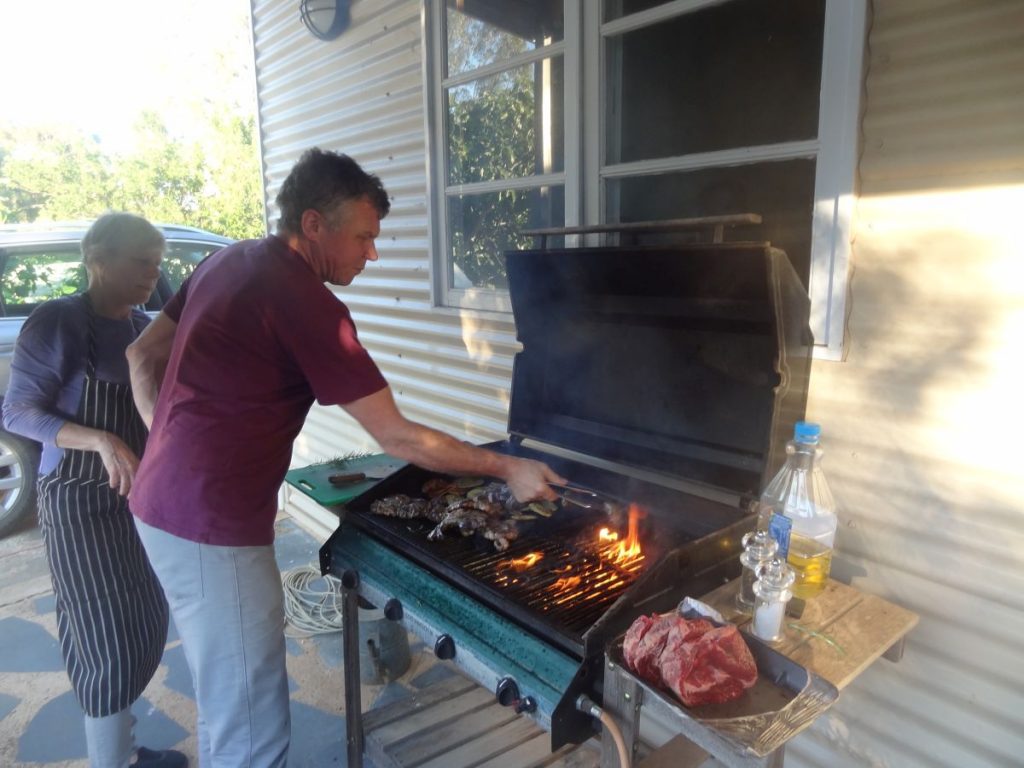 In the evening, we are no more bound to the pub – our accommodation has a barbecue – and of course, we brought our own chef as well as four juicy steaks, a bunch of lamb cottelets and yummy sausages. (John complaines about doing our steaks „well done“ – is an offence to the steaks, he said!) – and in addition we had aspargus, mushrooms and potatoe chips also from the grill. 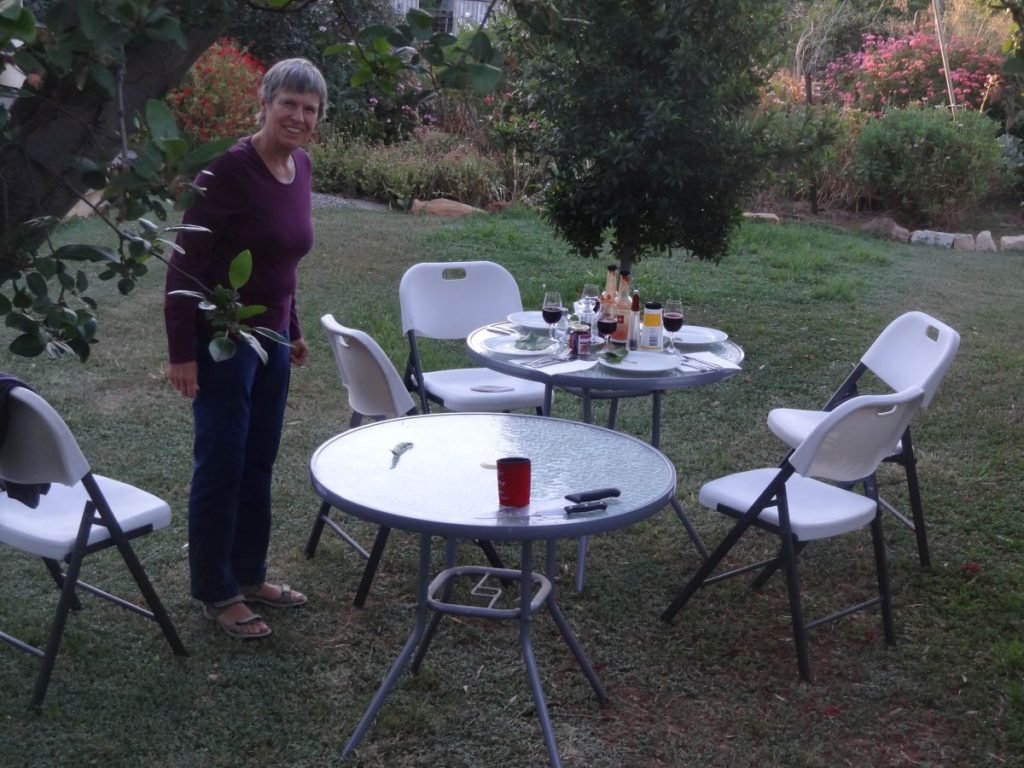 Annette has made up the table… 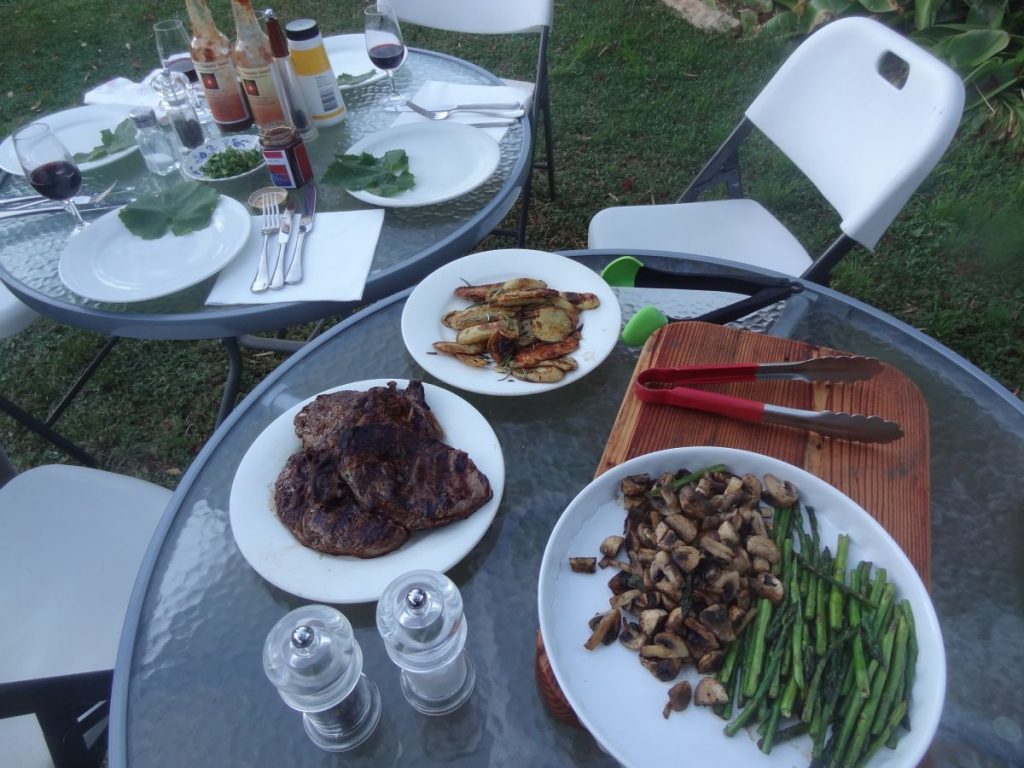 …and after this delicous dinner, we sit in the lounge of the guesthouse, drink another wine and have a look on „Dinner For One“, a Freddy Frinton Comedy, which is well known in Germany. We told Kerryn and John about it – and they were really thrilled!

Before we go on with the wine (there are dozens of wineries…) our resolute host, Sally (by the way: her husband is Gerry and together, they have „Gally’s Meeting House“) leads us to the garden around the old railway station. 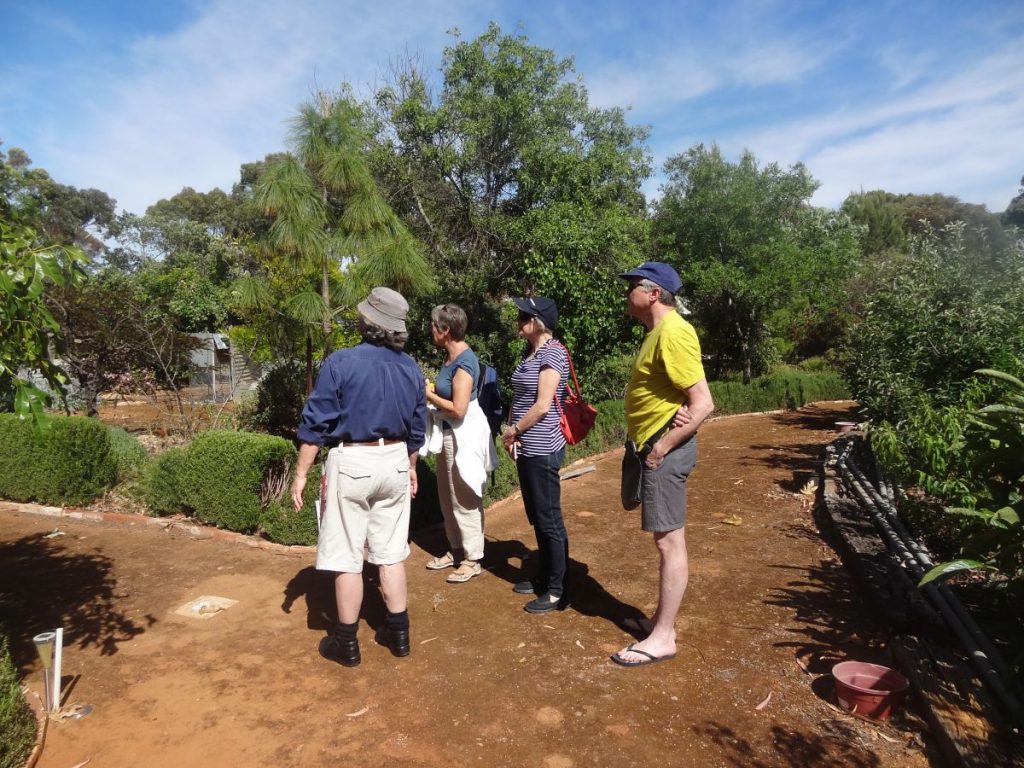 The garden was layed out by Carol, who is working since 25 years regulary in the place. The garden is – beside the kids an the grandchildren – her life. Sally tells a sad story about Carol an her partner, who was supposed to care for the buildings, but he didn’t. The partnership broke and Carol had to sell some of the property. She kept the Railway Station and the huge garden. She lives now in Adelaide and tries to do the two hour drive to Farrell Flat as often as possible to care for the wonderful garden.

Here you can read more. 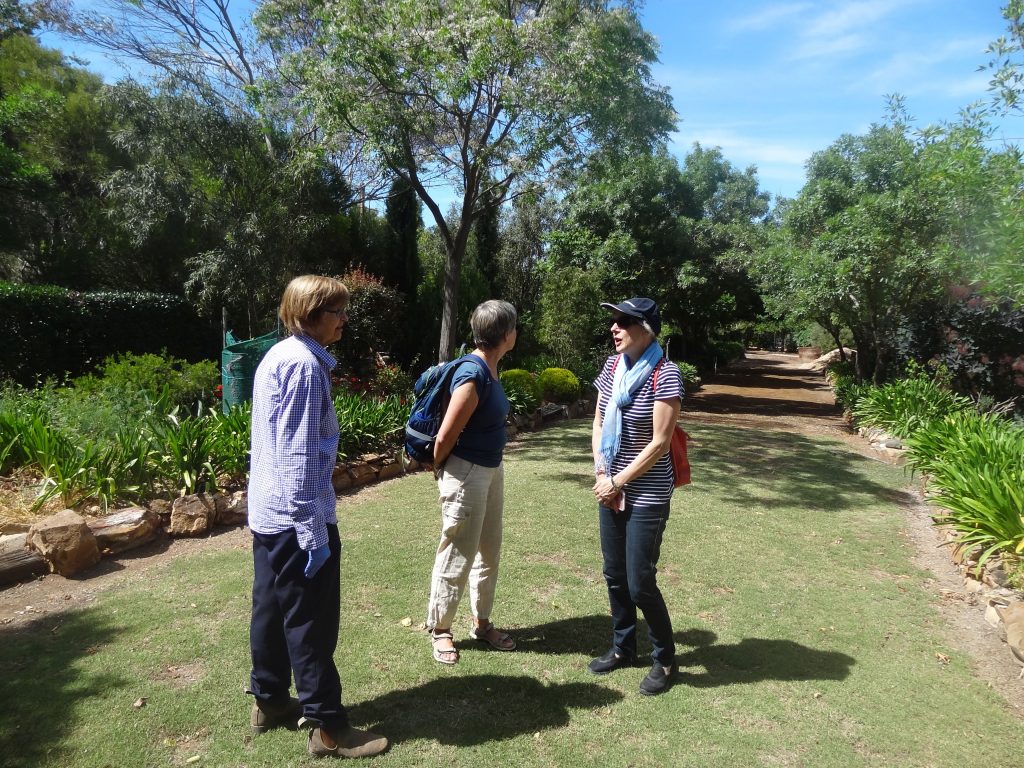 And indeed, we meet Carol in her garden. Annette did some talk shop with the gardener, changes experiences and we enjoy the lovely little peace of earth… 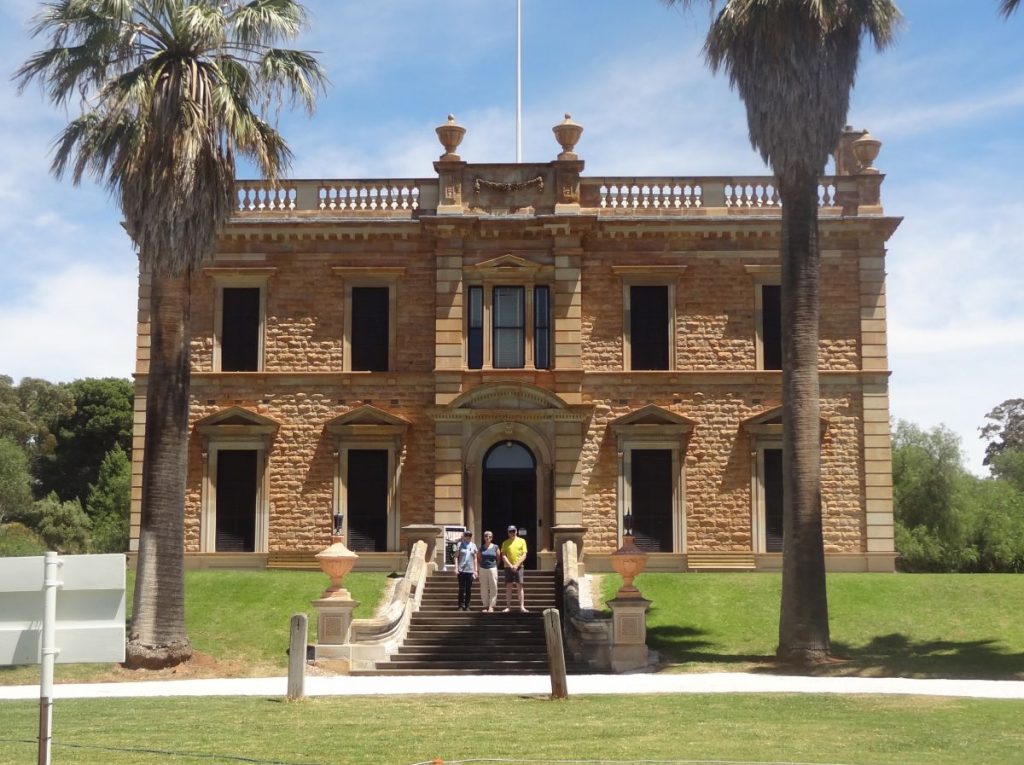 We proceed to nearby Martindale Hall. It is a very british looking old house (Georgian style with Italian influence, says the brochure). Nevertheless, nothing European in Australia has more than 200 years…

You can walk through numerous rooms and you learn a lot about the film „Picnic At Hanging Rock“, which was made partly on the premises.

Than another winery: „O’Leary’s“, there we hat a yummy Merlot an a very balanced Spätlese.

As you can see little of the wine, we give the panorama from the cellar door’s terrace.

And that brings us allready to the end of our Clare-Valley-Highlight. In the evening, we invite Kerryn and John for dinner in the nice restaurant „Cliché“ in North-Adelaide – far better than the Farrell Flat Pub – and only little more expensive.

Tomorrow, John has to go interstate again – and we prepare slowly for the several „farewell“ meetings here in Adelaide. In the evening, we will meet Janet and Leigh again, Tuesday another visit at Anne and Tony’s and Wednesday we will not only give Jane another visit but see Wendy and Peter, who were in Germany together with Anne some ten years ago.

You see, what is the most important in travelling… 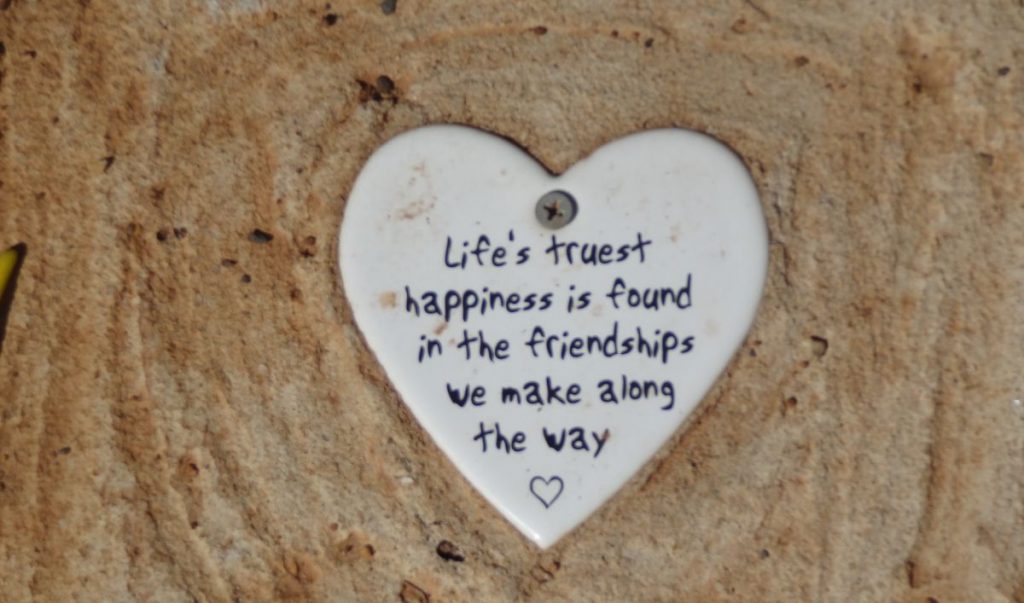 And here comes the map for today. Further down, you find the buttons „previous“ and „next“